The lawn is gone…now what?
Three ways to save water and still have a fun,
versatile outdoor living space
Originally published in the Santa Cruz Sentinel, June 5, 2015

A coworker recently told me that, due to new watering restrictions in her city, her family was thinking about replacing their lawn with artificial turf. With a moderately sized yard in a suburban neighborhood, the professional estimate she got was $10,000 to replace the lawn with synthetic grass. (Really??) To give her a more affordable, and, in my opinion, more preferable option, I showed her a photo of our backyard, where, last fall, we traded lawn and sprinklers, for succulents and a drip system.

If you want to replace your lawn, but the alternatives sound too expensive, too challenging, or too activity-limiting, I’d like to present three relatively inexpensive DIY options that will reduce your water bill, while still providing a versatile, pleasing place to hang out on a Sunday afternoon.

The labyrinth
Creating a labyrinth is probably the simplest way to cover a large (or small) space with a minimal investment of time and materials. Labyrinths have ancient origins, and can be found all over the world. Although the term is often used to connote a confusing maze of pathways, the classic labyrinth is actually a large circle or square shape with a single course that twists and turns to lead you to the center and back out again.

A labyrinth can be created with various materials including rocks, flat stones, bricks, concrete, herbs, grasses or even raked leaves.  If you Google “backyard labyrinth,” you’ll see the huge variety of materials, patterns and shapes used, and it seems as if no two labyrinths are alike.

Nancy and Mark Voogd live on a forested acre in Bonny Doon and have created two, large, triple-spiral labyrinths on their property—a more private one behind their home and another near the road, easily accessible to walkers and neighbors. Nancy became obsessed with the triple-spiral pattern when she encountered one in a nearby yard. “I was walking the path and thought, ‘I want to be doing this every day.’ I was a quilting, singing, stay-at-home mom—meditation and all of this was not part of my world. But something about this labyrinth just grabbed me,” she says. Four days later she and Mark had built their first labyrinth.

Nancy visits her labyrinth daily, spending 15 minutes or more following or resting on its courses. “I’ve walked other patterns before, and they’re lovely, but there is something about this pattern and my brain. It’s pretty magical actually—I feel so much calmer and happier. It’s just a goofy pattern on the ground, but it’s had a profound effect on my life,” she says. “Sometimes, I’ve gone into it so angry, but I don’t come out angry. It’s hard to hold onto those stories I was angry about. It looks very innocuous, but it’s a powerful experience.”

Although the Voogds appreciate the symbolic and meditative possibilities of labyrinths, they also embrace the fun it can inspire. “I skip, I run, people have crawled. I feel more in my body and listening to whatever my body wants to do on this pattern than on other patterns. I don’t know why that is. It’s for laughing. It’s for playing.  I’ve tried to walk it backwards—that’s hysterical,” says Nancy. Children love it too. “For awhile we had a trampoline, but even with the trampoline the kids would come and run the labyrinth first, and then they would go play on the trampoline,” says Nancy.

The real bonus of landscaping with a labyrinth is its versatility—one can be created in just about any size or shape of available space, using materials you may already have on hand. Although the pathways are typically defined with rocks or paving stones, a labyrinth could also be constructed from found materials such as broken pottery, cut-up tires, pine needles, or landscape edging.

The wildlife sanctuary
The first thing I noticed at Cathy Gamble’s house in Aptos, were the two small signs posted on her the front of her home— “Native Plants Live Here” and “Certified Wildlife Habitat.” She says she’s not trying to brag. She just wants people to be aware of the possibility of creating a wildlife sanctuary in their own yard.

Her relatively small, mature yard was described to me as the picture of what a drought-tolerant garden should be, but I didn’t expect such lush, natural-looking beauty. Cathy says she has a drip system to get new plants established, but otherwise, rarely uses it. Instead, with a combination of California native and non-native drought-tolerant plants, she monitors the water needs of her plants by sight. “I look at the plants to see if they’re looking stressed,” she says,” and water only the ones that really need it.” On the ground, she surrounds her plants with a thick layer of gorilla hair mulch (made from shredded redwood) which prevents them from drying out, and she tries not to do too much manicuring. “I leave it wild to attract grown and feeders,” she says.

To kill the lawn, she covered it with cardboard (without much ink) for two months. Then—with the help of two friends—she put landscape cloth over the cardboard to keep down the weeds, and planted California natives that know how to survive in our dry climate, and provide a year-round food source and cover for wildlife, such as California coffeeberry, ceanothus and Manzanita. During my short visit I saw squirrels and lots of birds (she’s counted 38 species of birds in her garden for Project FeederWatch) attracted by the food and protection offered by this small oasis.

Cathy has three dry creek-beds that break-up the landscape and also help divert rainwater to where it’s most needed. Most of her yard is surrounded by trees (rather than fences) to add privacy and cut down on the drying effects wind. My favorite backyard feature is her rusty hand-push lawn mower, which has been retired to a soft bed of mulch with a sign that reads “R.I.P.”

The patchwork quilt
When we let our lawn die last summer, I studied Pam Penick’s helpful book “Lawn Gone” for ideas about what to do next. In September, my husband began digging up the dead sod. At a workshop at Native Revival Nursery, I learned that we could leave the dead sod in place and use chunks of it to build mounds for our future landscape. I hired a landscaper who also works at Succulent Gardens in Castroville, and she drew out the plans for a raised island of succulents in the center, surrounded by a wide gravel pathway, and more succulents and ornamental grasses around the perimeter.

We saved money by doing much of the heavy lifting ourselves—digging out tired plants, choosing new ones, and hauling fresh garden soil from the driveway to completely cover the dead sod and improve the soil. My landscaper converted the sprinklers to a drip system, which I use sparingly now that the plants are more established. Large succulents can be expensive, so we purchased mostly small ones, many of which have grown quickly enough to fill in the spaces. (Succulents can also be easily rooted from cuttings.) The wide gravel pathways reduced the number of plants we needed to purchase, and, in one corner of the yard, the path transitions into a small gravel patio.


The colors and variety of succulents reminds me of a patchwork quilt, and I couldn’t be happier with my new low-maintenance, low-water garden. I’m currently thinking about creating some pebble mosaic stepping stones to break-up the gravel. Stay tuned. 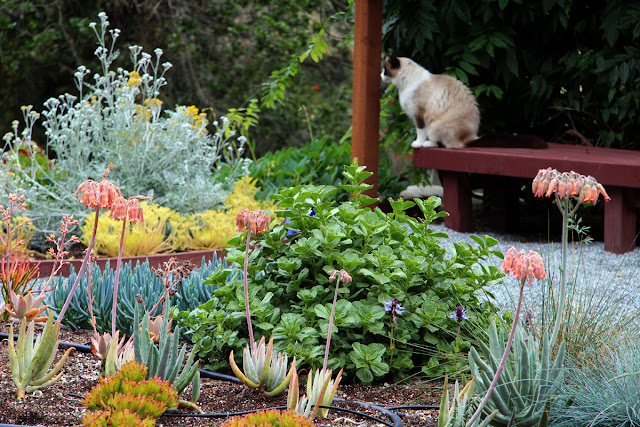 Tina Baine
California
As the monthly DIY columnist for the Santa Cruz Sentinel since 2003, my projects represent the latest trends in creating useful and artsy stuff, often from inexpensive and recycled materials. I write about the artistic process, more so than than the product, exploring a wide array of traditional and non-traditional media through firsthand experience and interviews. My goal is to entice readers to try new techniques and unusual materials, to expand their definition of art, and to encourage all their creative endeavors. As a newspaper photographer in the central valley and the south bay for 8 years, I have a special affinity for the photograph, and often incorporate photo images into my personal work. I also enjoy writing, and have been working on a history of Aromas, my hometown, since 2009.